It's been a busy week this week! We've been busy working on the master bedroom which is completed now. I've moved back into the master bedroom now and today we spend the morning cleaning out the upstairs hallway so that tomorrow we can start on the upstairs hall. Hopefully by next week we'll be totally done the upstairs! *yay!* We decided to put a basic diamond pattern in the middle of the floor which was waaayyy less time consuming than the fancy pattern in the second bedroom but still looks amazing. 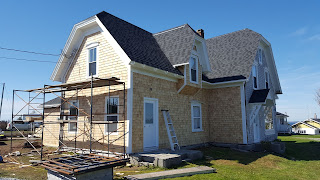 The guys have been hard at work on our siding and it's looking great! They've gotten about 1/3 of the house finished and are making good progress. 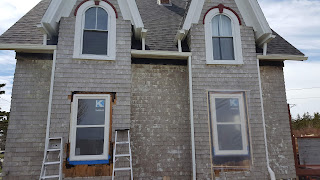 We installed the second window and wrapped in plastic. It took us a lot longer to put in this window as we had to resize the frame to fit the new window size. The old one was quite a bit smaller and, thankfully, the original frame was the same size as the right hand window so once the old frame was removed the even older frame just needed some resizing. 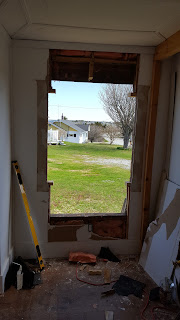 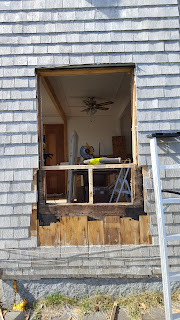 We still need to fix the inside and when the guys make it to that side of the house we'll finish putting the blue weather sill around the windows. 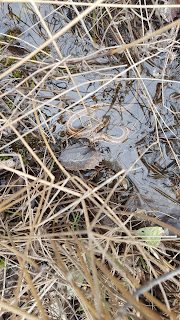 Went for a walk along the trail that's on the mainland on Sunday and saw a little snake suntanning itself on the path. Spring is here even the snakes have thawed out! When we got closer it retreated into a pond on the side of the path which was interesting but it seemed happy where it was so we didn't disturb it.


Last night was filling in the ditch we dug with a weeping tile drain and gravel. Took us a few hours and both of us hurt so bad we could hardly move! Getting our exercise for sure!


Today we opened up the motorhome and had a look. Most of the locks and handles on the outside compartments had seized. So there was a bit of WD-40 to get them to open again. The inside is in great condition and the awning opened up just fine. haha took me a while to remember the correct procedure to open it and then again to close it!

We opened up the hood to check the engine before starting her up but we found that the battery exploded sometime over the winter. Not sure what caused it to explode.. I'm thinking a power outage killed the trickle charger and overloaded the battery but pure speculation at this point. All's I know is that the battery is totally kaput and we'll have to pick up a new one. 😩 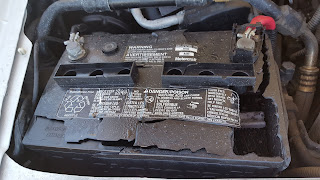 So this week will be more sanding and painting the upstairs hall. But once that's done it'll be time to move downstairs and finish the last two rooms!

And who knows what else awaits us this week....