Hope everyone had a great long weekend! We took two days off for Sunday and Monday. We'd been working pretty hard fixing the walls upstairs and painting.

But first I thought I should post a pic of our ditch all filled in. When I get over to the sump pump ditch I'm going to do a better job of not mauling the grass so we can put it back. But our ditch is doing a pretty darn good job at redirecting the water. (As we have had lots of rain the last week) 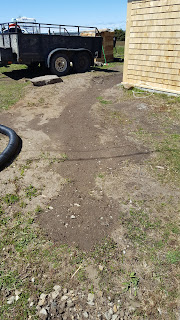 We have almost completely finished the upstairs. Just the hall floor needs to be painted then just a few finishing touches... 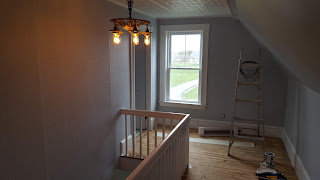 I was going to paint the floor today but by the time I cleaned up and got it ready it was too late to give the floor enough time to dry. So I got it all prepped for first thing tomorrow. Then we can move downstairs! We decided we like the tissue paper method so mush we're going to do the entire lower landing like that. 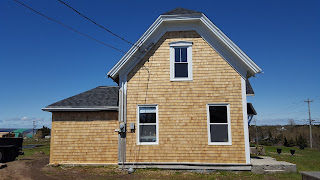 The guys have been slowly making progress on the outside but with the weather it's been slow. Did I mention slow? lol. But they're down to just two sides of the house. One with the new windows is quite complicated but we aren't done inside yet so they have time. :p

Mum is in Shellburne at a shop that is going to sell some of her jewelry which is pretty cool! Hope it goes well... Looking forward to see what she has to say when she gets back. (After her disappointment over my lack of progress while she was gone wears off) 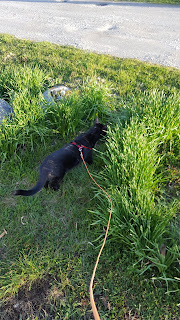 Meanwhile we did have a nice day and even got the kitties outside. Poor Sam spooked himself on some plastic; went inside and refused to come out again. Meanwhile Carl and I wandered around and grazed. Which he found the carpet with the deepest shag and puked it all back up again. Like.. really!? There's a whole house of hardwood and you picked the carpet. Well I can't complain it was me that let him graze in the first place! You'd think I'd learn by now. Ha! OMG and last night he was doing the zoomers thing and leaped up to run over the couch. Meanwhile i'm laying there as he body slammed my face and, realizing his mistake, just kept going and scrambled right over me! I wasn't expecting it and he knocked the wind out of me. It was so hilarious I so wish I'd caught that on film!