Well... Nearly a month since my last post! Bad Tyler! 🙊

It's been a busy month! We've completed a deck and installed the front door. We also set up an Etsy shop for mum's jewelry! Hrm putting it down in writing makes it sound like nothing!

The first big project we completed was our new deck! Mum built the plans and drafted the blueprint for us. Home hardware delivered everything we needed... They must love us by now.

First was the fun part of removing the bottom two rows of shingles; Which turned out to be relatively easy once I worked out I could take the circular saw and set it to be just under the thickness of the shingles and ran it along the bottom! Lickety split the tiles were detached and nails, omg so many nails, were removed. After fixing up a few boards that needed to be replaced we installed the metal flashing and blueskin protector.
Mum's design made the deck just over 8' wide so that we didn't have to cut any of the joists. Which saved a huge amount of work!


We set up the mitre saw and began cutting the boards until something when ptwang inside the saw and it stopped dead in it's tracks! So back to the circular saw to finish up cutting. Mum has a steady hand so it wasn't bad (unlike my inability to cut a straight line if my life depended on it).

We ended up running out of decking just before the last corner was finished! Initially we had planned to put a step at the end but decided to extend the deck out to the edge of the house which used up a bit more wood than we had planned to. So we had to call it a day and get a few more planks ordered.

You can just see the little pile of remains that we had to take to the dump. It was about a moving box and I was quite pleased with how little waste there was despite cutting at an odd angle.

We took the old storm door and turned it into the back rail which added a great rustic look that matches the house nicely.
A few things I didn't get pictures of included digging the post holes which were actually really easy as the earth is quite soft here and there are hardly any rocks. As it turns out when they built the marina down the street they took all of the rocks from most of the nearby properties and so they cleared off our property of almost all the big rocks. It's been so dry here the last month that made digging really easy as well. Funny that the grass is all brown and the soil like powder even though the fog and humidity are quite high. Our dehumidifier still pulls 20 pints of water out of the air every 6 hours. Which, as my mind wanders, brings me to the well. Our hand dug 25' deep well that despite there being no rain and many wells in the area going dry still continues to supply us with water! Heh we've been stocking up on dehumidified water buckets all over the house just in case though!

Our doors and windows arrived and we've installed the front door. It took us all day and nearly killed us in the process I swear and I don't have any pics of the door install because of it. I'll post a shot of the front doors when its nice out (Finally rain!).

We had actually planned to have the second door installed this week but grandma arrived and while taking her on a tour of nearby Shellburne the brake lines in my car failed, well sprung a leak. OMG really!? So it meant taking Lucy (My cars name) to Kia in Yarmouth so they can fix it. I'm just waiting for the call to let me know that I can drive back and pick her up. They were good enough to give me a courtesy car in the meantime to use. Which I almost have to duck to see out of the windshield. Oh, right, and now its raining *yay* so no installing the second door or windows for a few more days *aww shucks 😏*.

In other news I tried my hand at making an acrylic pour using silicone spray to make a really cool cell pattern in the paining. It's pretty funky! 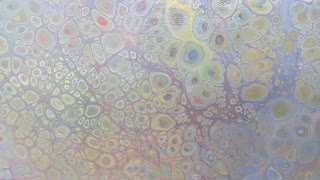 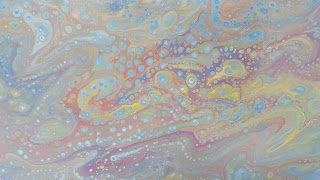 And I'm closing today with a shot of mum and grandma hanging out near the causeway.