First I have to tell you about an important happening I missed on the last post.
We have been happily following Google maps for our directions and to keep us off the main interstates as much as possible.  You just do not see much on the interstates going 75 mph (ok I generally keep Furgy to about 65mph or the gas consumption is mean).  Having to watch for big trucks, wind gusts blowing us around and drivers that cut in to your lane to soon after passing, watching the landscape is not high priority.  But back to Google maps; the whole trip to date has been an adventure and Google has made sure we have had one.  As we have seen quite a few things we may have otherwise missed, we did not think anything about following it up Hwy 126 from Cuba NM to Hwy 4.

So we drive up and up into the snow and to the top of the mountain until we hit a cattle guard and the pavement ended.  We sat there looking at each other thinking really, now what.  Thankfully a truck with a couple of hunters came along that I flagged down to ask how far the pavement was out.  One got a sour face and said about 10 miles, the other piped right up and announced that "I wouldn't drive that up there".  We thanked them profusely and promptly turned Furgy around and back down the mountain...... just another adventure.

Back to Roswell.  We had fun wondering around for 2 days.  Stopped at a local pub and chatted with the locals.  Went to the Roswell Museum and Art school; a beautiful building and quite a nice surprise.  The museum had local artists featured with everything from contemporary to landscapes, mixed media, and an exhibit of the work shop of the first rocket scientist of New Mexico, Robert H. Goddert.

We also had to see the UFO Museum and Research Center.  What fun displays and news articles, and signed affidavits. It would take a normal person days to read everything.

Although the Spring River Estates and RV park was pretty bad (new bathrooms that had not been cleaned since they were built I swear), not a tree on the site and on unlevel gravel pads, it was walking distance to downtown so easy for us to see everything.

Feb 16/18 Then, off and running again we decided to lengthen our driving time and head to New Orleans.  Leaving New Mexico we ran into miles of dust storms being blown by quite high winds.
Our first stop for the night was at the Sam Wahl Recreation Park on Lake Alan Henry.  Water... and lots of it so we pulled out the lawn chairs and sat with a cocktail watching the ducks and smell the water.  Decided to stay for a extra day to enjoy the area we woke to cold, blowing, weather.  From a balmy 25C the day before to 9C the next morning.

In the night the live trap they had chained to the garbage cans had caught a young raccoon. 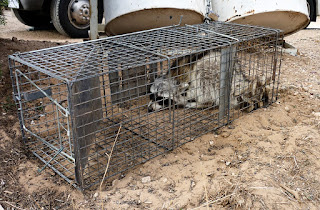 Feeling sorry for him we rode the bikes up to the park entrance to let them know.  Only to find out that they charge $12 per person to use the park and that did not include the $10 the sign had explained to camp there.  So for a primitive camp (no hook-ups at all) it ended up costing us the same as if we had stayed in a full hook up one.  No wonder the place was empty. 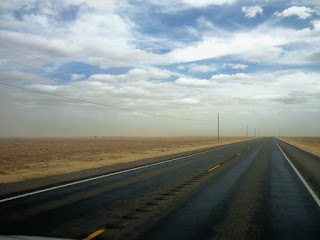 Feb 18/18 Heading south east again in the morning lead us through little towns and lots of twists and turns.

Driving to another state park that we never got to because as we were driving over the berm at Aquilla lake I noticed a rest area just below us.
Perfect spot, had washrooms a nice park and we ended up staying there for the night.  The park had a sign stating the Army Core of Engineers but we could not figure out if it was built by them or for them.  Lots of fishermen in the creek and was a haven in the middle of nowhere for us.

Feb 19/18 We woke to fog, and thick fog that lasted almost all day.

Ending just before we reached Village Creek State Park.  Beautiful country as the dry Texas landscape changed from brown and dry, to green and lush.

Village Creek State Park was almost totally covered in feet of sand and mud during hurricane Henry last August.  So although the trails were all closed the bathrooms were clean and the site lovely.  $3 per person and $15 for the site which included water, electricity and a sani-dump (on the way out).

Feb 20/18 The drive along the Gulf of Mexico along Holly beach was beautiful.

We stopped to play in the sand for a bit and look at all the sea shells, of all kinds.  The beach road was almost deserted sunny, windy and over canals, draw bridges, and even a ferry ride.

Then wouldn't you know it; as we were registering for our night at the Palmetto Island State Park (another affordable and well kept park) they were towing out a motor home that had mechanical problems and I felt so bad for it. After registering we get back into Furgy, start her up and the battery light came on.  We cuddled in for the night (after riding our bikes around the park) in our beautiful site with fan palms and lots of green, thinking we would worry about it in the morning.  Sure enough we get up and she starts but the battery light is still on.  Finding a ad for a mechanic on the park map headed over to have it looked at.
2 hours later and $450.00 we had a new alternator and on our way again.

After a 100 miles of teeth chattering roads and 12 lane highways we made it into our new home site for the next week.  The Pelican RV Park in New Orleans.