From Sedona to Roswell

After a wonderful 7 day stay east of Montezuma's Well we headed out for the next part of our adventure and on our way to Roswell NM.

Sedona was beautiful and red and very busy even in mid morning when we drove through.

The road after Sedona to Flag staff was windy, narrow and a little frosty at times.  Just enough pull outs so not to hold out so much traffic.
We stayed at Black Barts RV park in Flagstaff.  Showered (much needed) and caught up on on the laundry.  Staying in the red desert, everything we covered in red dust.  So even the blankets had to be washed.

Heading out of Flagstaff we found the Sunset Crater Volcano National Park.

Walked up to the top of the smallest volcano (took a few stops) The wind was howling and tried to push us off the mountain. 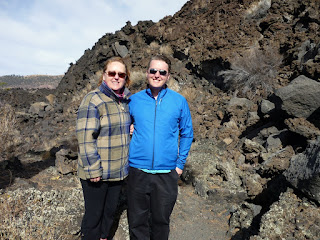 Had lunch and took the loop around the back side to the Wupatki National Park.  It was beautiful and what a difference in landscape from Ponderosa Pines to a vast painted desert.

The drive from Wupatki National Park to Navajo National Park was windy and like most USA road bumpy and teeth chattering.  Even things we though we all tied down had a way of shaking themselves out of spaces.  We cant complain though as the desert has a beauty all of its own.  As we were driving to our next spot you could see the black clouds building in front of us and I was glad that we made it to the spot for the night.  About 15 min after we arrived at the Navajo National Park it started to blizzard.


And got cold.  We watched the temperature drop over 10 deg in an hour.

Although it did not snow more than an inch and the sun was bright in the morning it did get a bit chilly at -10 C.  But up and at it early we walked down the path to the lookout to see the cliff dwellings.

The cliff dwelling were pretty spectacular and well worth the stop to see.

Hoping to head to warmer country we left early
which was to bad.  The campground here was free (and one of the cleanest we had stayed in to date) and we could have stayed for 14 days.  It would have been nice to explore the trails down to the bottom of the canyon.

The four corners monument was next and although the road there had a few spectacular views......

The Four Corner Monument was a disappointment (in the words of bugs bunny "I think I made a wrong turn at Albuquerque") and we should have turned north one more time to see the Canyons of the Ancients.  But we did not and got sucked into the one and only tourist trap we haven't avoided.  Run by the natives, it had port-a potties for washrooms and the entire center monument was surrounded by kiosks trying to sell Native Indian wares.


So instead of seeing the canyons and towers it was flat and blah.

So off to the next spot and Tyler found this absolute gem of a spot called Angel Peak Campground.  Another BLM area just south of  Bloomington NM.


A great spot that had white rock paths all over the top of the cliffs.  It reminded me a lot of the Drumheller area in Alberta. 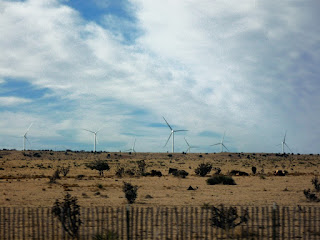 Another cold night and a early start to Roswell, through the desert that went on forever. 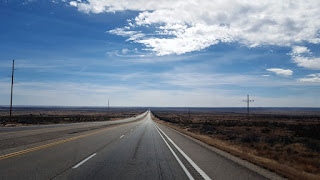 We were lucky enough to see 2 herds of antelope on this highway as well as a buzzard, rabbits, and quite a few hawks.

So aliens of Roswell coming up. lol