Hello all!
After much discussion mum has finally persuaded me to switch to Blogger by Google as our new Blog site. I've been quietly sitting here on our folding table enjoying the scenery while I work on our new blog site (P.S. Hope you like my little animation I created):

It's such a great spot. Our RV overlooks a little canyon, the temperature is a nice high teens, and we're frequented by many Mason bees. It's a bit surprising to see so many bees flying around with virtually no flowers in sight but they seem to be making due just fine.

As mum has mentioned before finding a spot with descent network to be able to do anything other than read emails and post a bit of text it's nice to find a spot where I have two whole bars on my phone! So I took the chance to copy paste our old blog posts into the new blog (sorry mum looks like I get all the posting credit now!). I've also taken the time to setup a program called HTTrack Website Copier to download a few programming tutorial sites and a few travel references so that I can review them while I'm offline (I wish I could do the same thing with YouTube videos but I don't want to use up all my data). Lots of RV parks have Wifi but they are so brutally slow it's hard to accomplish anything on them... Alas its really killing our online time which mum is perfectly content with. She has lots of offline hobbies like wire wrapping and resin to keep her occupied. Oh and she made herself a little crochet pocket belt (like a baby fanny pack) so she can pack a phone and her keys when we go on hikes.... or now a ride as we just bought a couple of, you guessed it, bikes from Walmart! heh there was a lot of humming and hawing and passing through the bike isle repeatedly before we bit the bullet and bought a couple. One of the reasons for going with Walmart bikes is that they are inexpensive and to our great pleasure actually work really well for the mile of rocky road we've taken them on so far! 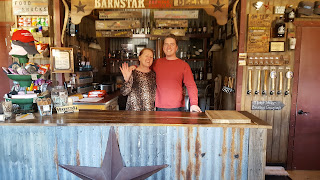 Skull valley happened to have a small brewery called Barnstar Brewery which is only open on the weekends and has an awesome selection of really tasty beers! If you are ever near Prescott or Skull Valley I highly recommend stopping in for a pint.

In Skull valley we were hit by a tree branch that fell during a wind storm and we had to go in for some repairs. The branch was a real doozy and took out our skylight, TV antenna, and the fridge vent cover! We spent a few days in Prescott at the Affinity RV repair center. They were great and made sure we had everything we needed! They even let us stay in the back for free with water and power while we waited for a new skylight to arrive (apparently the Canadian model is different!). After that we wandered down to Montezuma's Castle (Had nothing to do with Montezuma and wasn't a castle but the Europeans that found them thought so) and Well. 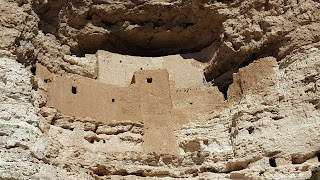 We're actually camped about 10 miles from there right now! And plan to be for about a week. We have decided to stay here an extra week longer (which is another week longer than we would have before the repairs delayed us.) and see if maybe we can follow behind winter. We want to go up to the Four Corners National Monument and peek into Colorado for a few days before heading down towards New Orleans.

The kitties are doing well. We lost Sam for a night. Little bugger figured out how to pry open one of the sliding Windows on the top and escaped. Needless to say we all had a sleepless night hoping he would come back. Which at about 6 am there he was wanting back in! We were so happy to see him even Carl got really mad and smacked Sam because he was so worried too... Pacing back and forth all night. We're trying out the leashes and it's a tentative success so far; Well except Sam is a monster trying to get out all the time. Carl he claws at the door but when you open it he makes it to the step and no further without coaxing (Which makes us happy).

Whoa just got buzzed by a Hummingbird! We put up a feeder for the birds they haven't found it yet. And as for other wildlife everyone insists that there is plenty but we haven't seen any. Not even a Javelina. I'm starting thing there just aren't any!

Well time for a cocktail... Tyler signing off.
Posted by Tyler at 15:00